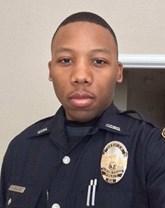 “Officer Wallace will be remembered for his selfless and dedicated service to the community and fellow officers.”

Clayton County Police Officer Darryl Wallace was killed in a single-vehicle crash while responding to a call on the evening of March 15, 2015. He had just received a call about a prowler and had his lights on when he swerved to avoid another vehicle and lost control of his patrol car.

Officer Wallace, a 2014 graduate of the Clayton County Police Academy, had been with the department for five months. He leaves behind a fiancé, his parents, and six brothers and sisters.