About The 300 Club of Atlanta

Honoring the police and firefighters of metro Atlanta.

The 300 Club of Atlanta was founded in December of 1991 with the express purpose of assisting the officers and families of fire fighters, police officers and first responders who are either disabled or killed in the line of duty. Additionally, we seek to provide special state-of-the-art equipment to metro area organizations, such as the Atlanta Fire Department. 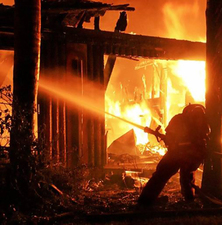 We are one of just 80 similar organizations throughout the United States; to our knowledge, there are no similar organizations in the Atlanta area providing such immediate assistance. Geographically, we focus on the five-county greater Atlanta area, but have reached out to public safety departments beyond Atlanta in certain circumstances. Over the years, we have contributed more than $900,000 in support of our public safety officers and their families.

Members are encouraged to attend the annual banquet as we present awards to selected individuals who have been identified for providing service “beyond the call of duty” during the preceding year. These acts of heroism often involve great personal sacrifice for the officer — and his or her family. This is a heartwarming, highly-moving event for 300 Club members as they witness firsthand the appreciation from those who give so much, yet receive so little in return.

The 300 Club of Atlanta is a non-profit, non-political, independent organization of three hundred citizens of the City of Atlanta and surrounds whose general purposes are:

“To receive funds and property, to invest and reinvest the same and to disburse and distribute the same as voluntary, gratuitous and charitable gifts and contributions to or for the benefit of dependent widows and children of law enforcement officers and fire fighters, who, while in the employ of the City of Atlanta or in the employ of other municipal corporations and political subdivisions in the geographical area of the City of Atlanta, as this corporation may authorize in the future, have lost their lives in the line of duty and to those law enforcement officers and fire fighters and their families who in the opinion of the Board of Directors of the corporation have shown extreme courage, valor and devotion to duty in the performance of their duty; or have been wounded or injured in the line of duty or have extreme or unusual need; provided, however, that the selection, from the class above-mentioned of the recipients of such gifts and contributions, and the determination of the amount thereof, shall rest in the absolute discretion of the Board of Directors of the corporation. In furtherance of the foregoing purposes, the corporation shall have and exercise any, all and every power which a non-profit corporation organized under the provisions of the Code of the State of Georgia for charitable purposes could be authorized to exercise, but not any other power. No part of the funds or property of the corporation shall inure directly or indirectly to or for the benefit of any member thereof, and no part of the activities of the corporation shall be the carrying on of propaganda or otherwise attempting to influence legislation.”

300 Club of Atlanta Board